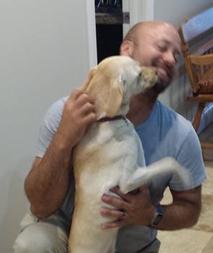 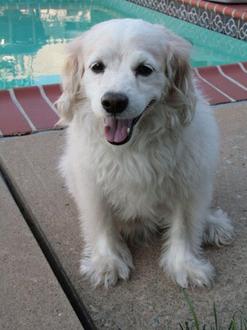 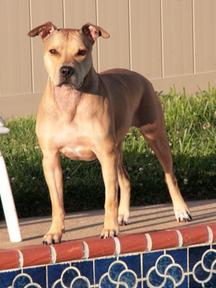 John is amazing! He came to us at just the right time, when our Casey was skiddish about taking walks or going in the car. Now, she is a dream to walk, and she looks forward to the parks and places John takes her. He even has her cruising around town in his truck. Her world has opened up immensely, and she has many new friends. We recommend him highly! John is super loving, patient and confident with his furry friends.

“JOHN BAKER TO THE RESCUE”
In the summer of 2016, we found ourselves in a very unexpected dilemma. Our house that was under construction due to fire was not ready as the contractor had promised, for the second time around. Our rental unit which was already under a contractual extension had to be vacated, and we did.

My family and I found ourselves with very little choices because no one would rent us a place month to month, and our contractor had promised again our house would be ready in about 2 to 3 weeks. Therefore, we opted to accept family and friend’s kindness by offering their homes. I went to stay with my daughter and her family and my son and his family with some extremely nice friends.

We have a dog (more mine, though) his name is Champ, and he could not stay with us due to my son-in-law allergies to pet dander and my son did not want to abuse the welcoming from his friends by adding a dog to the family, which I totally understood. My sister offered to care for him for no more than three weeks’ period because she would be going on vacation for a couple of weeks after that and other reasons. We were glad that Champ would stay with someone he was familiar with and would take good care of him.

Well, the three weeks went by and my sister's time to go on vacation arrived, and our house was a long way to be completed.  What do I do with my doggie? I had a couple of days to find a place for him, and I started doing my due diligence. Asked around for dog care places, called pet hotels in the area, and nothing.

Someone I know through work told me about a dog hotel about 45 to 60 minutes away and helped with getting a reservation for Champ, even though they were booked. I was very disappointed I could not get anything closer but went on with the planning to drive Champ there the next day. That night it was tough for me to fall asleep thinking about my doggie being so far and with strangers.

While at the vet's office the day we were supposed to drive Champ to his hotel, my son asked if they knew anyone in town that would care for Champ.  My son had noticed how sad I was that we had to take Champ so far, then the lady at the front desk pointed at several business cards that offered dog walking, pet sitting, etc., Champ got his vaccine and seemed a bit down.

While my son was driving to the hotel, I started making phone calls to the people on the business cards, one, two, three, four calls and none of them answered. I was about to give up, but I still had one more business card to call, still hoping Champ could stay in town.

Guess what? John Baker answered my phone call; and as I started explaining to John my situation he asks if he could meet Champ ASAP (one of his requirements) and I told my son to turn around to meet John. We met at a park in town, Champ was so friendly with John, and it was like if Champ had known John for a long time. John, my son and I discussed the deal and John accepted to care for Champ for 2 to 3 weeks, which was the estimated time of completion promised by the contractor working at my house. We dropped Champ off at John's house a couple of hours later.

Not to bore anyone reading this testimonial, my house did not take three weeks, but it took three months to completion John was gracious and understanding enough to keep Champ under his care the whole time, as I asked for extensions a week or two at a time. John Baker and his family treated Champ so well like if it were their dog (they have a few). Every time I visited Champ seeing him happy and in good shape was a huge relief for my family and me. We were dealing with a different problem with the contractor, but at least we knew Champ was in good hands.

Now we have someone in town that would take excellent care of Champ when we plan a family vacation. I recommend John Baker to anyone that loves their dogs, he is a very special person and came into our lives as a blessing and at a most needed time.

Champ and John developed such a bond that I decided to ask John for his dog walking services so Champ can see him every weekday and be a happy doggie.

After moving to Secaucus with my 2 pit mixes, I knew I needed to find a new dog walker. We found John and we are lucky! John took the best care of my girls. He asked questions to make sure everything was done correctly and he’s a true dog lover. My dog Hannah fell sick shortly after we hired him, and he came over the day she passed away just to say goodbye. That says a lot about how much he loves his furry clients.
John now walks Starr multiple times a week and she loves him. Starr even stayed at John’s for “vacation” when we had to attend a wedding out of town. Judging by the poolside photos and her new toys, I don’t think she missed us very much! Haha!